Last December, Emma Thompson arrived for “Effie,” along with Dakota Fanning, Claudia Cardinale, husband and co-screenplay writer Greg Wise, and an opportunity to make believe that in Venice, it’s 1850 once again.

It seems to me this is the sort of film that ought to be made here. It’s a sustainable sort of film: no explosions, no taxis careening down tiny rii, no fake collapsing buildings. Just a recount of John Ruskin (played by Greg Wise), one of the most famous foreigners to ever have been consumed by Venice, and his ill-fated marriage to the young Eufemia Gray (Dakota Fanning).

The film’s backdrop is a rich one: the Victorian Ruskin feverishly documenting Venetian Gothic architecture as he feared it might be destroyed at any moment by occupying Austrians, while he simultaneously patronized (in the literal sense) contemporary artists William Holman Hunt, Dante Gabriel Rossetti (Ricardo Scamarcio), John Everett Millais (Tom Sturridge). This trio formed the rebelliously contemporary Pre-Raphealite Brotherhood, dedicated to the pursuit an art form born of and inspired by the natural. Millais (who painted poor Ophelia, lifeless in the watery reeds…) also used Effie as model, in fact—perhaps that was when their romance began… 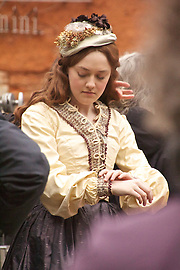 My romance, instead, began the first day of shooting here, on set with Emma, Claudia, Dakota, et. al., actors meticulously costumed by Ruth Meyers in 1850 garb shipped in mostly from Spain, as Venice seems to only stock attire from 1700’s (didn’t the Venetian world die with Casanova?). You’d think as a former editor, I’d be a bit more blasé about the whole process. Anzì–it was nice to be back in the milieu.

They’d meticulously recreated an alimentari on the ponte leading from a small campo near San Giovanni e Paolo; it was astounding how the Venetian aspect retreats into another century voluntarily. Everyone seemed quite excited to be there—or (being a big Thompson fan anyway), maybe I was just projecting my own delight. I’d helped transport one of Arzanà’s traditional boats to be used in the background, so once we got there, I was free to take in the scene. Lots of publicity cameras, Emma in a bright white piumino coat circulating with her teenage daughter, Director Richard Laxton posing with one stella after another, Greg Wise looking quite Ruskin-ish. Set ups weren’t too taxing, everything went as scheduled—and I got some great shots.

I also got to try out some of that 19th c garb a few days later, rowing for an entire day in the Grand Canal in the traditional boats of Arzanà. The rowing wasn’t too taxing, but I have certainly acquired a new appreciation for modern, light-weight vestments.

The weather was splendid, and it was a holiday to boot, so there was little traffic. We rowed back and forth on cue as the 2nd unit halted water traffic when the shot was rolling. The fact that I just can’t seem to cull the shot selection only speaks to how fascinated I was by this unusual, marvelous spectacle. How often to you see a caorlina vela al terzo with its firey orange sails proudly traversing the Grand Canal, seeming to reclaim its once indisputable domain? (I know, I know, the tendency to hyperbole strikes again.)

The film is “Effie,” it’s in post now and due out in July, 2012. Surely it will get some sort of nod at the festival in September?

The bitter bora has moved on, so several hundred locals and passersby enjoyed bright sun and vin brulé as they affirmed their continuing opposition to the size and number of massive cruise ships that come and go via the Venice lagoon. Venessia.com joined group Fuori le Maxi Navi dal Bacino San Marco (Big Ships Out of San Marco Bay) and Comitato No Grandi Navi to organize the event; there was vin brulé, a papier mâché Campanile and riotously-colored boat, plenty of costumes, stilt walkers, and music; there were sign up sheets to gather support and lots info on why everyone’s so mad. Afterward the group formed a procession to San Marco, drawing the attention of everyone they passed along the way. You can make a point and be entertaining at the same time, right? Here, you better…

Only in Venice. The organization “Fuori Grandi Navi dalla Laguna” (Big Ships Out of the Lagoon) invites costumed demonstrators to gather on Friday, February 17 from 2:30 p.m. on to raise their voices against the number and route of oversized cruise ships that traverse the Venetian canals.

If you’re here for Carnevale, feel free to join in: there’ll be music, vin brule, and a few surprises, as always. Un’esperienza unica.

Venite numerosi—come one, come all! And don’t forget your mask.

The winter of 2012 has brought meters of snow and arctic temps throughout Italy and the rest of Europe;  weeks of sub-freezing temps here in Venice have turned the lagoon into a concoction resembling a frozen margherita without the tequila.

Water taxis banned from airport access due to motor-damaging ice (the larger Alilaguna are running, however); ice-breaking motoscafi working to keep channels open for the rest of the fleet; the opening Carnevale sfilata rowing parade was posponed a week due to icy temps and 20 to 30 mile-an-hour winds. This is the winter I experienced when I first moved here over seven years ago, the one I braced for in subsequent winters, but the one which has only just returned this year.

It’s a challenge, but Venice and Venetians take it as it comes, recounting prior winters just as cold and colder, decades and centuries past, engineering appropriate outerwear (furs, furs) to survive errands and market shopping, using the cold as an excuse for a hot chocolate (literally, mind you: hot, melted, chocolate), or an extra Carnevale fritelle or galani pastry (merita), one more ombra in compania as we make plans for when the cold snap ends.

On a more intimate scale, I spotted a pair of devoted mallards who make their home in a neighborhood canal. They’d apparently been out for a “stroll,” but were having difficulty avoiding the ice on their return to the rio dell’Orto. I hope they made it. Forza, coraggio…

I’ll be back to blogging regularly soon, but in the meantime, here’s wishing all of us a 2012 that’s as bright, promising, and peaceful as a sunrise on the Dolomites.